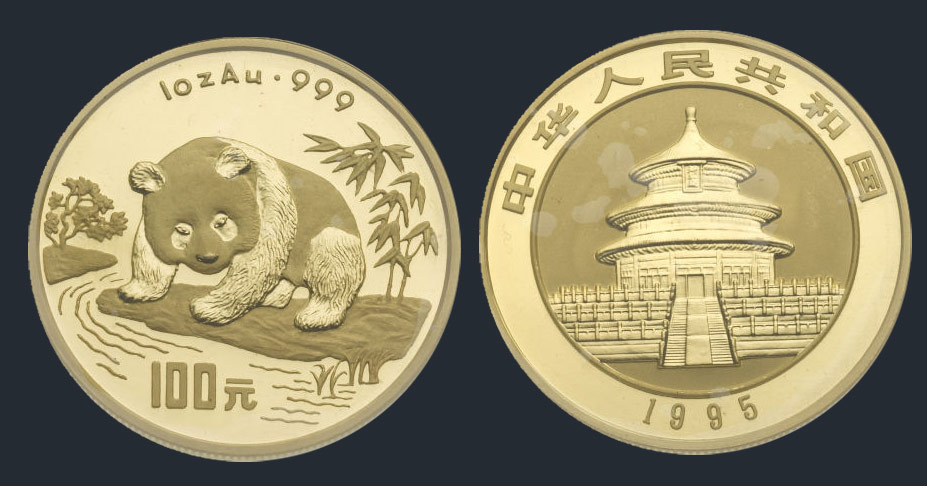 The Chinese Gold Panda is a series of gold bullion coins issued by the People’s Republic of China. The official mint of the People’s Republic of China introduced the Panda gold bullion coins in 1982. The panda design changes every year (with a single exception) and the gold Panda coins come in different sizes and denominations, ranging from 1/20 troy oz. to 1 troy oz. (and larger ones as well).

China issued its first gold coins picturing an Panda design in 1982, in sizes of 1, 1/2, 1/4, and 1/10 troy oz. of 999 fine gold. Beginning in 1983 another size was added – 1/20 oz. Larger Panda coins were issued in some years, weighing 5 and 12 oz. These popular coins are issued in Prooflike Brilliant Uncirculated quality with a different design each year. A freeze of the design was announced with the 2001 issues—and thus the 2002 Pandas were identical to 2001. But collectors spoke up in behalf of annual changes, and China reverted to their original policy. There are several mints that produce these coins, including but not limited to: Beijing, Shenzhen, Shanghai and Shenyang. Unlike coins made by US mints that carry mintmarks to distinguish their origin, Chinese mints usually do not employ mintmarks. In certain years there are minor variations — in the size of the date, style of the temple, etc.–in the coin design that allow the originating mint to be determined.