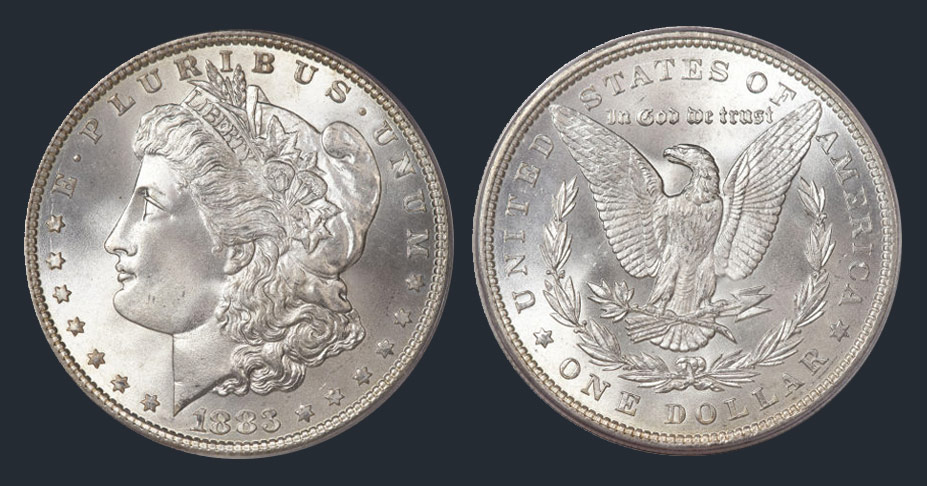 The Morgan dollar was a United States dollar coin minted intermittently from 1878 to 1921. It was the first standard silver dollar minted since production of the previous design, the Seated Liberty dollar, ceased due to the passage of the Fourth Coinage Act, an act which also ended the free coining of silver. The coin is named for its designer, United States Mint Assistant Engraver George T. Morgan. The obverse depicts a profile portrait representing Liberty, while the reverse depicts an eagle with wings outstretched.

The dollar was authorized by the Bland–Allison Act. Following the passage of the Fourth Coinage Act, mining interests lobbied to restore the free coinage. Instead, the Bland–Allison Act was passed, which required the Treasury to purchase between two and four million dollars worth of silver at market value to be coined into dollars each month. In 1890, the Bland–Allison Act was repealed by the Sherman Silver Purchase Act, which required the Treasury to purchase 4,500,000 troy ounces (140,000 kg) of silver each month, but only required further silver dollar production for one year. This act, in turn, was repealed in 1893.

In 1898, Congress approved a bill that required all remaining bullion purchased under the Sherman Silver Purchase Act to be coined into silver dollars. When in 1904, those silver reserves were depleted, the Mint ceased to strike the Morgan dollar. The Pittman Act, passed in 1918, authorized the melting and recoining of millions of silver dollars. Pursuant to the act, Morgan dollars resumed mintage for one year in 1921. The design was replaced by the Peace dollar later the same year.

In the early 1960s, a large quantity of uncirculated Morgan dollars was found to be available from Treasury vaults, including issues once thought rare. Individuals began purchasing large quantities of the pieces at face value, and eventually the Treasury ceased to exchange silver certificates for silver coin. Beginning in the 1970s, the Treasury conducted a sale of silver dollars minted at the Carson City Mint through the General Services Administration. In 2006, Morgan’s reverse design was used on a silver dollar issued to commemorate the old San Francisco Mint building.