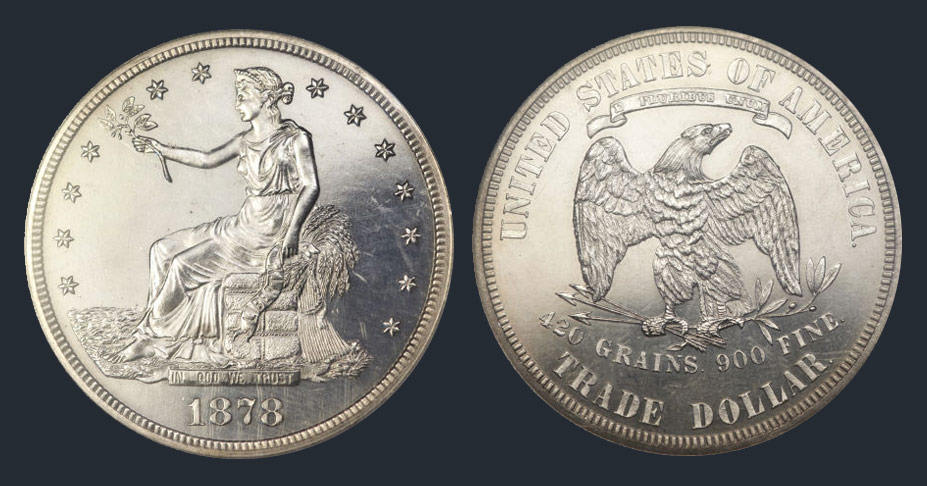 The United States trade dollar is a silver (fineness of .900 or 90%) dollar coin that was issued by the United States Mint and minted in Philadelphia, Pennsylvania, Carson City, and San Francisco from 1873 to 1885. Trade dollars intended for circulation were last produced in 1878 and proof coin production continued until 1885. The coin weighs 420 grains (27.2 g), about 8 grains (520 mg) more than the domestic silver dollar (Seated Liberty Dollars and Morgan Dollars) of the time. It is 4 grains heavier than the Mexican peso; however, the peso is .903 silver.

The coin was designed by William Barber, the mint’s chief engraver. More trade dollars were minted in San Francisco than Carson City and Philadelphia combined. San Francisco was closest both to the source of the silver as well as the ultimate destination of the coins, China. Many Trade dollars have what are called “chop marks” on them. Chinese merchants would stamp the coins, thus guaranteeing weight and fineness and, also, advertising their businesses.

The United States Congress authorized the U.S. Mint to create a trade dollar to improve trade with the Orient, China in particular. Prior to that, the Mexican peso had been the primary silver coin used in trading with China. In fact, the eagle on the trade dollar’s reverse looks quite similar to the peso’s.

Collectors are warned that recently a large number of U.S. Trade dollars have been forged in China made with base metal. Careful testing or purchasing from known dealers or buying sealed and certified coins may be necessary to avoid these fakes.