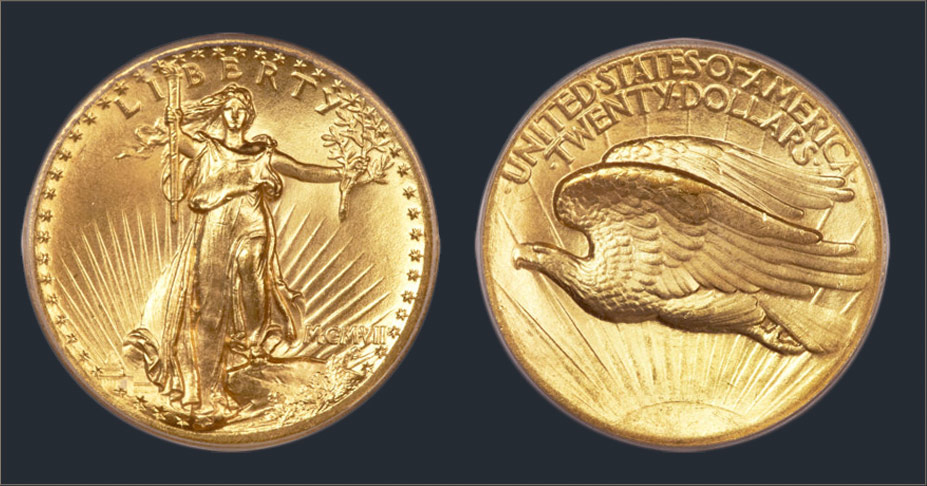 The Saint-Gaudens double eagle is a twenty-dollar gold coin, or double eagle, produced by the United States Mint from 1907 to 1933. The coin is named after its designer, the sculptor Augustus Saint-Gaudens, who designed the obverse
and reverse. It is considered by many to be the most beautiful of U.S. coins.

In 1904, President Theodore Roosevelt sought to beautify American coinage, and proposed Saint-Gaudens as an artist capable of the task. Although the sculptor had poor experiences with the Mint and its chief engraver, Charles E. Barber, Saint-Gaudens accepted Roosevelt’s call. The work was subject to considerable delays, due to Saint-Gaudens’s declining health and difficulties because of the high relief of his design. Saint-Gaudens died in 1907, after designing the eagle and double eagle, but before the designs were finalized for production.

After several versions of the design for the double eagle proved too difficult to strike, Barber modified Saint-Gaudens’s design, lowering the relief so the coin could be struck with only one blow. When the coins were finally released, they proved controversial as they lacked the words “In God We Trust”, and Congress intervened to require the motto’s use. The coin was minted, primarily for use in international trade, until 1933.